Around the world, black hand prints are appearing on doorways, scorched there by winged strangers who have crept through a slit in the sky.

In a dark and dusty shop, a devil’s supply of human teeth grows dangerously low.

And in the tangled lanes of Prague, a young art student is about to be caught up in a brutal otherworldly war.

Meet Karou. She fills her sketchbooks with monsters that may or may not be real, she’s prone to disappearing on mysterious “errands”, she speaks many languages – not all of them human – and her bright blue hair actually grows out of her head that color. Who is she? That is the question that haunts her, and she’s about to find out.

When beautiful, haunted Akiva fixes fiery eyes on her in an alley in Marrakesh, the result is blood and starlight, secrets unveiled, and a star-crossed love whose roots drink deep of a violent past. But will Karou live to regret learning the truth about herself?

*This Review is full of spoilers so read with caution* 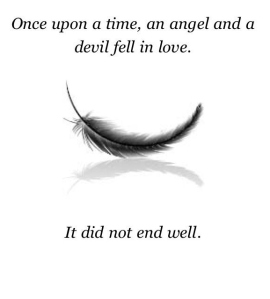 Ahhh!! Where to start!?!
Ok, so I heard a lot of talk about this trilogy on social media and thought, sounds good I’ll give it ago! The second I opened this book and saw the above in the beginning I knew this book was gonna be good! and I wasn’t disappointed!

The story is written in 3rd person, confession time! usually, I avoid books written in 3rd person which I know it despicable, but I’m trying really hard to break this habit as I know I miss out on so many great books by doing it. Anyway, it works really for this story to be written this way as so much is going on. The actual writing of the story is beautiful, I really felt like I was right there alongside Karou as the depth and detail of her surroundings was written so well.

Karou’s story is so different from what I have read recently. I love her character, she is very human yet somehow more. There is also a lot of mystery surrounding her, she often has to run off and go on secret missions that no one knows about apart from Brimstone and Issa  (who area Chimaera, a race of animal/human hybrids)  they also act as her guardians of sorts. Brimstone is the one that sends her on these various jobs.  And it’s on one of these missions she meets Akiva, it’s at this point of the story that things start to get really interesting but also heartbreaking. Akiva is an angel, a seraph to be more specific. It turns out that Angels and Chimaera are enemies and have been at war with each other for decades. The Angels have been burning their handprints onto various doors around the world. Side note: during this meeting we are also introduced to Razgut, who is a fallen seraph.

On meeting Akiva, Karou feels a connection to him, but at this point doesn’t know why. There is a fight where Akiva tries to kill Karou but she manages to escape.  A few weeks (it may have been days..) later there is an explosion at Brimstones house and he and Issa are killed.

I should mention here that Karou uses portals to go around the world on the jobs that Brimstone sends her on. The explosion is part of the Angels plan to close all of the portals.

Akiva during this time hasn’t been able to stop thinking about his meeting with Karou and he eventually tracks her down in Prague. They meet again and after spending some time together Akiva realises that Karou is the “reincarnation” of Madrigal, a Chimaera soldier who saved his life on the battlefield 17 years ago.

We then get flashbacks of Akiva meeting Madrigal (in Eretz, the world that the Angels and Chimaera are from) and the story of their star-crossed love unfolds, this story culminates in them being found out and Madrigal is executed for treason.

Which brings us back to the present day, Akiva then gives her the wishbone that Brimstone used to wear and tells Karou that she once she breaks it she will know who she is.

Karou breaks the wishbone and all her memories as Madrigal come back to her, Akiva that confesses he is responsible for Brimstone and Issa’s deaths. Karou then flees with Razgut to Eretz through one of the portals that hadn’t been destroyed. Akiva returns to his sister and brother.

And that’s where this book ends!

I loved almost all of the characters in this book! Particularly:

Overall to totally recommend you read this book especially if you like fantasy, angels, and star-crossed love!

3 thoughts on “Daughter of Smoke and Bone – Laini Taylor”

☆꧁Monthly Wrap Up꧂☆
COVER REVEAL
A steamy, female-centered dramedy series, Sex/Life, is coming to Netflix June 25th, and we cannot get enough of the hot new trailer!
📚 Quotable Tuesday 📚
🎪 CURRENTLY READING 🎪
📝Book Review 📝
He’s a real-life, blue-eyed, tough-as-nails, thirtysomething cowboy who is so darn strong he looks like he could lift a car just for the heck of it.
Bestselling Author Kandi Steiner delivers a breathtaking, poignant romance and unforgettable adventure about two strangers and the road trip that will change both of their lives forever.
📚 Quotable Tuesday 📚