It’s been almost a year since eighteen-year-old Ella Rodriguez was in a car accident that left her crippled, scarred, and without a mother. After a very difficult recovery, she’s been uprooted across the country and forced into the custody of a father that abandoned her when she was a young child. If Ella wants to escape her father’s home and her awful new stepfamily, she must convince her doctors that she’s capable, both physically and emotionally, of living on her own. The problem is, she’s not ready yet. The only way she can think of to start healing is by reconnecting with the one person left in the world who’s ever meant anything to her—her anonymous Internet best friend, Cinder.
…
Hollywood sensation Brian Oliver has a reputation for being trouble. There’s major buzz around his performance in his upcoming film The Druid Prince, but his management team says he won’t make the transition from teen heartthrob to serious A-list actor unless he can prove he’s left his wild days behind and become a mature adult. In order to douse the flames on Brian’s bad-boy reputation, his management stages a fake engagement for him to his co-star Kaylee. Brian isn’t thrilled with the arrangement—or his fake fiancée—but decides he’ll suffer through it if it means he’ll get an Oscar nomination. Then a surprise email from an old Internet friend changes everything

As you can probably tell from the title, this is a re-telling of Cinderella but with a twist. Ella is not your traditional Cinderella. She has been left scarred and damaged from a car crash that also killed her mother. After 8 months in a coma, she wakes up to find that she must move across the country to live with the father that abandoned her and his new family. The only bright spot in Ella’s life is her online friend Cinder.

I really liked how this book didn’t follow tradition, there was only one super-mean step sister, the other was relatively ok and no wicked step-mother. Instead, the partial bad guy in this was Ella’s step-dad and the mean kids from Ella’s school. The fairy god mother came in the form of Ella’s Vivien and her two dads and prince charming is of course Cinder.

This story is told in first person and from the perspectives of both Ella and Cinder.

Ella’s battle with accepting her disability and scares after the accident is heartbreaking, but I think she was an amazingly strong character. After everything she has lost she is stilling getting up each day and trying to live. I think that she is really brave, from re-connecting to Cinder to going back to school even after the bullies attack, emotionally and physically.

Her friendship with Cinder is sweet. The banter between the is just so funny and I can defiantly see why she falls for him without even meeting him. I

I really liked Cinder (who is really Brian Oliver, a Hollywood actor) from the moment that he finds out that Ella is still alive you can really tell that he has genuine feelings for her. The thing that I absolutely loved the most about him was that he didn’t care that Ella is scared and uses a cane. He still loves and her wants her in his life even if it does damage his career. I feel his character was written with a lot of heart. 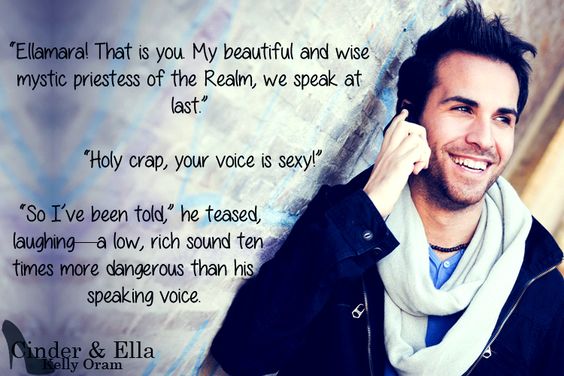 I really loved this book, its such an emotional rollercoaster lots of lows and lots of highs and come chapters particularly towards the end made me have tears in my eyes. But untimely this is a feel good read. If you are a Cinderella fan and enjoy re-tellings you will like this book.