Two years later might as well be two lifetimes.

Sienna’s in college, working hard to achieve her dreams, and trying to love another boy—and halfway succeeding. She’d be totally happy with her life if she could just stop dreaming about him. Deni. The boy she left behind on the shores of Banda Aceh.

When she gets word Deni’s coming to America, Sea’s world shifts. And when he arrives on her doorstep, she’s shaken to the core.

When they’re both invited to join a relief mission in Cambodia, they jump at the chance to help…and be together. As the time and distance between them melts away in the sticky Cambodian heat, Sienna knows her heart can’t take losing him again. 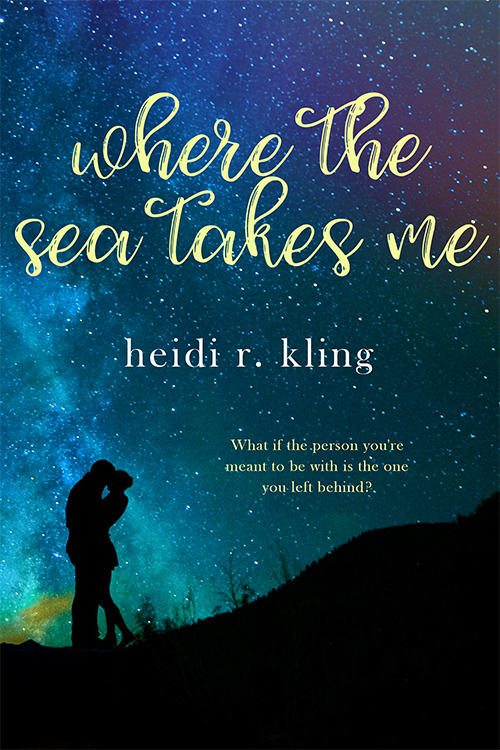 In less than two hours, Deni would be in a car with me.

I was going to be sick.

“Sienna.” His right eye twitched. He didn’t wear glasses anymore. After laser surgery (Vera’s idea) he didn’t need them. I still wasn’t used to his eyes without the glass cover. “I honestly don’t know about his wife. I assume she’s still around. Let’s just focus on the fact he’s coming to visit, okay? It’ll only be for a few days. And then, we’re off to Cambodia.” He patted my hand. “This means you won’t get much of a break after finals, but you don’t mind showing Deni around a bit, right?”

Did I mind? It was only what I’d dreamed of for the two years since I tore myself out of his arms on the broken shores of Banda Aceh, no matter how hard I tried to keep the memory of Deni in my past.

“No, it’s okay.” I didn’t want to show him my range of emotion. How torn I felt. How huge this was for me to see Deni again after finally getting ready to move on with Spider. I wouldn’t want him putting Deni in a hotel.

I felt like Dad and I should be on the same page about this summer, though. About what Spider asked.

“Want to hear another thing making this summer interesting?”

“Spider asked me to move in with him.”

Dad choked on a popcorn kernel. “What?” he asked, sputtering. “First Deni is coming, and now a boy wants my daughter to move in with him? Your old dad is going to have a heart attack.”

“Are you and Spider dating? I thought you were just good friends.”

It felt weird to talk about this with my dad, but we’d bonded in Indonesia. Things had been a lot better between us since then.

I got up and started to pace. “I like Spider. I always have. But why now? Why did this have to happen the same morning we find out Deni is on his way? I mean, obviously Deni is married but still…having him here will be weird.”

Dad considered me. “Sometimes life presents you with the perfect storm, and it’s up to you to figure out how to navigate your way through it.”

And I wasn’t ready.

Someone touched my cheek. My hair. “Sea? You awake?”

“No,” I grumbled at the cruel, whispering person. I was utterly exhausted from finals and felt like I’d shoved my head in the sand, eyes open and brain exposed. Everything felt dry and gritty and heavy. Groaning, I rolled over in the narrow, uncomfortable bed—

—and came face to face with my best friend, Spider.

He grinned, and his blue eyes sparkled like the sea at sunrise. “Morning, sunshine.”

I felt myself smiling despite all the sand.

Wait. Spider was already here? He’d planned to drive over the hill to help me move out of my dorm for the summer, but I hadn’t expected him until later. Like, during normal human hours. I squinted at the clock. “You’re reallyearly.”

I shouldn’t have been surprised. Used to popping up at dawn to ride the waves, Spider was ready to roll, his lanky body sporting his usual shirt and shorts and hoodie. He had more energy in his pinky finger than I did in my entire body; had ever since we were kids chasing each other around the cove into the wild blue sea. He was always hard to keep up with, but this morning, I knew it’d be impossible.

He tugged on a strand of my hair. “Yeah, well. I wanted to see you.”

Terima Kasih, Sienna. I have found you.

Waves of warmth washed over me, quickly replaced by guilt. Blinking, I looked away. “That’s…thanks, Spider. It’s good to see you, too.”

The last thing I wanted was for Spider to know what—or most importantly, who—I’d been dreaming about. He knew whatever had happened two years ago changed me, changed us, but I didn’t talk about it. Hell, I tried not to even think about it.

Apparently, my subconscious had other ideas.

Lately I’d been a little stir crazy. Maybe it was my first year of college wrapping up, maybe it was the dreams, or maybe it was something else. Something more. I couldn’t shake this feeling that something huge lurked on the horizon.

I needed to focus on that horizon. Not on the time I spent in Indonesia helping orphans. Or the fact that I fell in love with one.

This is the follow up to Where I Found You but it can be read as a stand-alone.

2 years have passed since Sienna said goodbye to Deni. Now she is just about to finish up college for the summer and getting ready for a trip to Cambodia to help traumatized girls who have been sex trafficked. But she is in for the shock of a like when Deni makes a surprise appearance in her life – could this mean a second chance for them?

Ah… this book was just as actioned pack and full of adventure as the first. I thought for a second I could smell a love triangle in the works but thankfully this didn’t happen. On a side note, I would like a book about Spider.

It was great to see that Sienna had matured and grown p a bit, she has finally accepted her father’s relationship with Val and she has a little brother now. I felt like she was emotionally in a better place in this book.

The tension and happiness when she is reunited with Dani is just tangible. I loved it, it certainly hits you in all the feels. Deni is still the chill free spirited guy he was in the first book. I can’t tell you how much I was rooting for these two to sort through thier shit and be together, it was so obvious that they still have very strong feelings for one another.

Finally, the ending was just so perfect!

Her debut novel SEA (Penguin/Putnam) was a finalist for Northern California Book of the Year,” an IndieNext Summer Pick, Goodreads “Mover and Shaker,” Scholastic Reading Pick, and Gateway Reader’s Award Finalist among other generous accolades. SEA, which launched June, 2010, is a bittersweet love story set in the aftermath of the devastating 2004 Indonesian tsunami, and is set to relaunch with Entangled Teen December 4 as WHERE I FOUND YOU (Sea series #1) with its sequel WHERE THE SEA TAKES ME out April, 2018!

After earning her MFA in Writing for Children from the New School in New York, Heidi returned to the Bay Area where she lives with her family in a tiny seaside village like the towns in her books.

She’s also the author of the acclaimed PAINT MY BODY RED (for fans of Speak and 13 Reasons Why), bestselling romantic comedy NOT OKAY, CUPID and the Spellspinners of Melas County series about feuding witches and warlocks.

Please visit her on twitter (Heidi R. Kling) where she loves to live-tweet TV shows, overuse gifs and chat with her readers about books, love and travel. She’s very fortunate to write stories for a living and is grateful to you for reading them!

2 thoughts on “[Blog Tour] Book Review: Where the Sea Takes Me By Heidi R. Kling”