Thursday Chatter is a weekly meme hosted by me! Where I chat about lots of different things, you can find a list of upcoming topics here.

This week I had the opposite problem to last week, where I struggled to think of a film, I had so many options for TV show’s I could pick so it was really hard to pick one.

So after a lot of umming and ahhing, I have chosen Brooklyn Nine-Nine as this week’s TV  show spotlight. 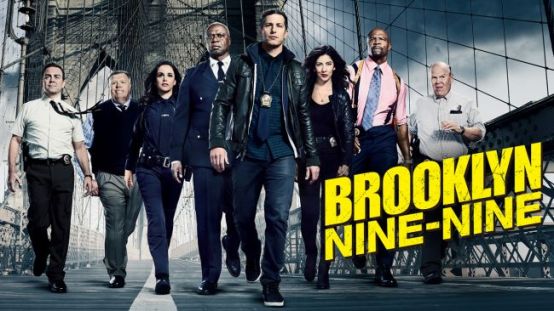 Captain Ray Holt takes over Brooklyn’s 99th precinct, which includes Detective Jake Peralta, a talented but carefree detective who’s used to doing whatever he wants. The other employees of the 99th precinct include Detective Amy Santiago, Jake’s overachieving and competitive partner; Detective Rosa Diaz, a tough and kept to herself coworker; Detective Charles Boyle, Jake’s best friend who also has a crush on Rosa; Detective Sergeant Terry Jeffords, who was recently taken off the field after the birth of his twin girls; and Gina Linetti, the precinct’s sarcastic administrator.

I first started watching this show around 2 years ago, so I was a late starter, I think it was one of my siblings who showed me this clip:

and after watching it I knew I had to watch the whole damn show, so I did what any sane person would and binge-watched all 4 seasons that were on Netflix at the time and I fell in love with it. It’s so funny and I actually like all of the cast which is not something that happens very often for me, usually there is one character that is annoying. Yeah, there’s not huge amounts I can say without giving away tons of spoilers, so if you haven’t watched it and you love a comedy it’s totally worth giving it ago.

Do you watch B99? Let me know in the comments.