It’s  Monday! What Are You Reading? is a place to meet up and share what you have been, are and about to be reading over the week. It’s a great post to organize yourself. It’s an opportunity to visit and comment, and er… add to that ever-growing TBR pile! So welcome in everyone. This meme started with J Kaye’s Blog and then was taken up by Sheila from Book Journey. Sheila then passed it on to Kathryn at the Book Date. And here we are!

Chase the Butterflies by Monica James

“Victoria, will you marry me?”

Those words changed my life forever…just not in the way it would for most. I had it all until one fateful evening transformed my life in ways I never imagined.

Nine months later, I move to a sleepy little town, hoping to escape the demons of my past. As I attempt to claim back my life, Jude Montgomery enters my world, and things begin to change.

I thought running would appease the nightmares, but I soon discover my past won’t let go. Things are not what they seem, and I begin to question the world as I know it. Jude may hold the answers, but will my love for him blind me to the truth?

Does the flap of a butterfly’s wings in Brazil set off a tornado in Texas? In my case, yes, it does.

Will the truth set me free? Or will it imprison us both?

My name is Victoria Armstrong, and this is my story…I think.

How to kick off a great summer in the Hamptons:

Snag a gorgeous rental on the beach. Check.

Get a job at a trendy summer haunt. Check.

How to screw up a great summer in the Hamptons:

Fall for the one guy with a dark leather jacket, scruff on his face, and intense eyes that doesn’t fit in with the rest of the tony looking crowd. A guy you can’t have when you’ll be leaving at the end of the season.

I should add—especially when the guy is your sexy, tattooed God of a boss.

Especially when he not only owns your place of employment but inherited half of the town.

Especially when he’s mean to you.

Or so I thought.

Until one night when he demanded I get in his car so he could drive me home because he didn’t want me walking in the dark.

That was sort of how it all started with Rush.

And then little by little, some of the walls of this hardass man started to come down.

I never expected that the two of us, seemingly opposites from the outside, would grow so close.

I wasn’t supposed to fall for the rebel heir, especially when he made it clear he didn’t want to cross the line with me.

All good things must come to an end, right?

Except our ending was one I didn’t see coming.

Sure Shot by Sarina Bowen 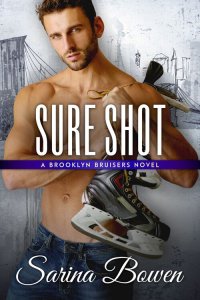 On the eve of her thirtieth birthday, sports agent Bess Beringer is ready to make some changes. Armed with a five-year plan—indexed and color coded—she’ll tackle her personal life with the same zeal that she brings to her successful agency.

A big, tall, ripped hunk of hockey player who’s just been traded to the Brooklyn Bruisers is not a part of that plan. Mark “Tank” Tankiewicz has a lot of baggage. He’s a ride-or-die loner with a bad reputation. He’s on the rebound. He’s also the sexiest thing on two legs, and for some crazy reason it’s Bess that he wants.

She knows better. But then she falls stupid in love with him anyway. And for a while it seems like maybe he’ll do the same.

Next, I’ll be Reading

No idea ha ha… hopefully something awesome though!